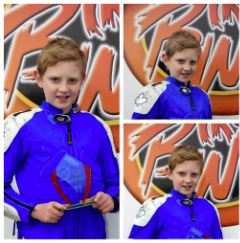 After a tough time at Donnington Park back in March with Thundersport GB Jake and the team headed to Darley Moor for the first round of racing there. Jake had a great day on the Saturday which started out wet, something that puts many riders on the back foot. Not Jake though! He was putting in faster and faster times as the day went on. The sun finally made an appearance on the Sunday and Jake was feeling very positive. He qualified 7th on the grid which due to the split of different classes was a great result.

After a poor start Jake made it back up into the top 10 and 1st in his group, sadly though, he was then black flagged. This meant he was called off the race track, this flag can be given for all sorts of things but in this case it was because of an oil leak and his bike was deemed dnagerous to other riders. This happened just 2 laps from the end so it was quite a blow; Jake was on track for his first win on his 125 bike.

After a lot of work on the bike it is back up and running and ready for the next round where Jake is aiming for the win his missed this time around!

As always we wish him the best of luck and are very proud to be sponsoring this talented young man.