Bradley-Mason LLP is a Chartered Building Surveying practice who offer the full range of Surveying, Building Consultancy and Project Management Services throughout the UK.

Our senior level team provide expert advice, with a focus on a quick turnaround service to maximise value and to fully understand our client’s businesses and property requirements. Ranging from investment funds and private Landlord’s to High Street retailers and commercial Tenant’s, we offer advice on the whole life cycle of their property interest from acquisition to disposal. Our aim is to predict your needs and ensure your expectations are exceeded. We question your requirements to ensure that our services are tailored to your current and future needs.

As one of the leading dilapidation surveyor specialists in the UK, Bradley-Mason LLP act for landlords and tenants in all aspects of dilapidations and leasehold repair. Our proactive approach to advising on dilapidations ensures compliance with the dilapidations protocol and is designed to avoid unnecessary costs, so that a settlement can be reached without the need for legal recourse.

Commercial dilapidation surveys are essential, especially if you are a contractor, developer or landlord about to start a new project. The in-depth property survey assesses and documents the state of building elements and structure including minor wear and tear. A detailed report reveals the work required to restore the property back to its original condition before the tenancy.

Dilapidations surveys are needed to give landlords an insight into whether maintenance contracts have been adhered to in accordance with the terms of the tenancy agreements. Works such as building construction, developments, infrastructure projects, road works, excavations and demolitions have the potential to cause faults in structures if the correct precautions are not taken, making any damage costly to remedy. Since it is often hard to prove how this happened and who is to blame, a dilapidation survey may be a good idea.

By commissioning an independent third-party surveyor, fairness is guaranteed for all parties involved, while bias and underhand techniques used to create or prevent additional works or affect the financial implications can be eliminated. Commercial properties from across all sectors including office, retail, leisure and industry are likely to have a need for a dilapidation surveys.

Here are three key reasons as to why a dilapidation survey may be required:

At Bradley-Mason LLP, we recommend that dilapidations are considered at an early stage and well in advance of the Lease end, whether we are acting on behalf of a landlord or tenant. Landlords will find it useful to know the condition of the building before the Lease expires so that the tenant can be fully notified of any works required. While some landlords prefer early implementations so that the work can be carried out and monitored for quality, others may choose a cash settlement instead. In either case, it is advisable to develop a strategic approach to facilitate the best outcome for all concerned.

For expert advice and to discuss your requirements, please get in touch.

Bradley-Mason LLP have been working with Toolstation Ltd for over ten years as lead property consultants in their expansion and national roll-out of trade counters and warehouses.  We are proud to announce that 400 stores are now open nationally and with more in the pipeline it is clear to see why our clients choose to use our services time and time again.

Our services for the roll-out typically include:-

Throughout the process our dedicated team provides reasoned and practical advice which draws upon a wealth of past experience.

Payment for construction works is usually paid in instalments, however on very small projects alternative payment methods such as payment upfront or payment on completion may be utilised. The payment on completion option relies on the parties involved sharing a high level of trust and conversely the payment upfront method is risky for the Client as works could be delayed or not completed therefore construction payments are usually paid in instalments.

Payment in construction is statutory protected. Part two of the Housing Grants, Construction and Regeneration Act 1996 (HGCRA) supports the timely and regular payments in construction projects. All construction contracts entered into before October 2011 must comply with the act and after October 2011, they must also comply in line with the amendments made in Part 8 of the Local Democracy, Economic Development and Construction Act 2009 (LDEDCA). The amendments were made with the aim to make payments fairer and provide clarity and certainty. This act provides details of payment provisions and should a contract not include or is missing information on necessary payment provisions then the rules of The Scheme for Construction Contracts (England and Wales) Regulations 1998 (Amendment) (England) 2011 (The Scheme) will apply. The sections and clauses referred to in this blog consider the requirements for contracts entered into after October 2011.

If a project is due to take longer than 45 days then under Section 109 (1) of the (HGCRA), the contractor is entitled to instalments, stage payments or other periodic payments, as it would be unfair to expect the contractor to fund all the works upfront and not get paid until the end. Section 109 (2) also states that the payment amounts, and intervals can be agreed between those involved (HGCRA, 1996).

Section 110 (1) of the HGCRA provides information on the dates for payment and states that the contract should provide ‘an adequate mechanism for determining what payments become due under the contract’ (1996).  This information is included in the JCT SBC 2016 under clauses 4.14 and 4.15. General provisions regarding payment, certificates and notices are included in the SBC 2016 in clauses 4.7 to 4.13.

For a contract to be valid under the HGCRA the following items must be addressed and included: what amount is due and when, the final date for payment (interim and final), the payment notice outlining the amount due and how it is determined, the default notice and the pay less notice. They must also adhere to a strict time frame, which if not outlined in the contract, will follow the timings in the Scheme. The time frames will vary depending on the specified contract and can be amended for individual projects. The total payment cycle which applies to all forms of JCT SBC totals 21 calendar days and the specific timings can be seen in Figure 1. The statutory dates between the due date and final date for payment in ‘The Scheme’ are 17 days, where as JCT contracts standard provisions are 14 days.

Under the HGCRA, a payment notice must be provided for each payment in the contract that contains the notified sum which can be issued by a ‘specified person’ for example the Client, Architect or Contract Administrator and must be issued within 5 days of the due date. A pay less notice can be issued if the payer feels less than the notified sum should be paid or if the contractor requires less than that outlined on their interim application for payment. However, the timing is critical, and it will not be valid if not served on time. The amended HGCRA states that the pay less notice must include the calculations to show the reductions and reasoning.

The contractor also has the right to suspend works under the Section 112 of the HGCRA if they are ‘not paid in full by the final date for payment and no effective notice to withhold payment has been given’. Clause 4.13 of JCT SBC states that the employer has a further 7 days to pay the contractor after they have given notice of their suspension and works can be suspended until full payment is received. It should also be noted that ‘pay when paid’ clauses were removed from contracts as per Section 113 of the HGCRA and Paragraph 11 of the Scheme (2011).

It is important that all parties to a contract are aware of the provisions and the specified dates. If the contract does not state specific dates this will not exempt a party to paying as the dates strictly outlined in the Scheme in line with the relevant acts will be enforced. 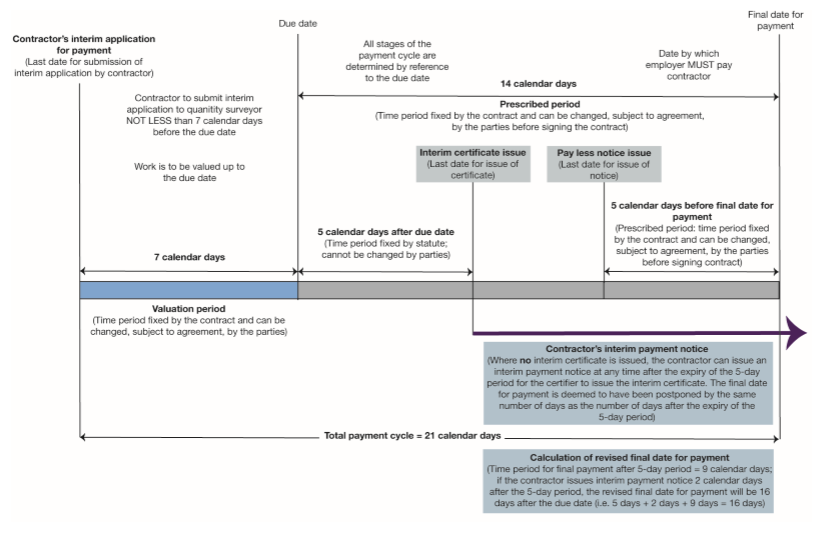 Security of Tenure gives the Tenant the right to be offered a new tenancy at the end of the term. This right was founded in The Regulatory Reform (Business Tenancies) (England and Wales) Order 2003.  It applies to tenancies unless the Landlord and Tenant agreed to opt out of sections 24 – 28 of the LTA 1954 at the start of the Lease.

If a Landlord would like the Tenant to leave at the end of the term or they wish to grant a new Lease on new terms, then a Section 25 notice must be served within 6 to 12 months before the Landlord wants the tenancy to end.  There are two types of Section 25 notice the Landlord could serve.  As mentioned, one suggests a new tenancy on different terms and the other initiates termination of the tenancy.  The Landlord can oppose a tenancy on seven grounds (A-G) which are stated in Section 30(1) of the LTA 1954.  These include the Tenant being in arrears of rent, the Tenant not complying with their obligations, the Landlord wishing to occupy the premises or redevelop the premises.

There are two main types of flat roof – cold deck roof and warm deck roofs, do you know the difference?

The insulation in a cold deck roof is installed at ceiling level, therefore the void is at a colder temperature than the room below during colder weather. This poses a risk of condensation forming within the void or on the underside of the roof slab. This can lead to rotting timbers, damp ceiling and ineffective insulation. Consequently, it is important that the void is well ventilated. This was the traditional way of flat roof construction and as insulation has increased over the years, the warm deck roof is now the commonly used method of construction.

The insulation in a warm deck roof is installed immediately below the roof membrane on top of the roof deck, usually with a vapour control layer underneath the insulation. Contrasted with the cold deck roof, this construction has a much lower risk of condensation as the void will be of a comparable temperature to the roof. Ventilation is also not required with this type as the design works by conserving heat. Furthermore, an Inverted roof is a different type of warm deck roof, where the insulation is installed above the membrane and so no vapour control is needed. This then means that the roof void or deck are at a similar temperature to the room below. 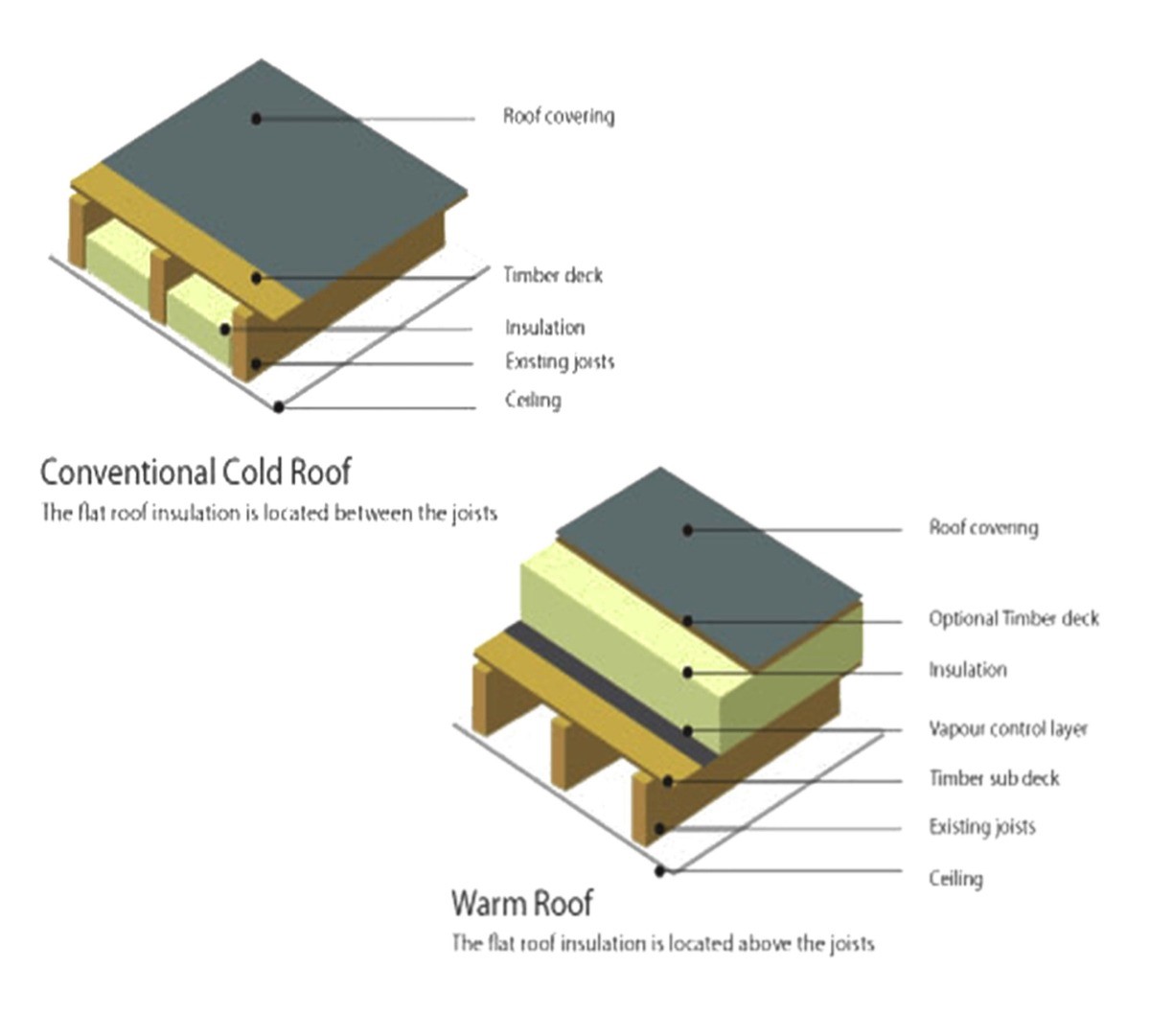